I started writing this article late on Sunday. Tired, miserable and lacking inspiration.

In the space of the last two days, I have benefited from reading two football related articles that have helped immensely with this write up. I have referenced both below.

I have been intrigued by football pundits who have been very quick to award this season's Premier League to Manchester City Football Club based on claims that City have the best & most complete squad in the league.  Many of these pundits are quick to dismiss Arsenal's chances on the same basis especially as every comment about Arsenal and Arsene Wenger is paraphrased with the latter's criminal act of refusing to buy an outfield player in the last transfer season.


Clearly Manchester City are the most expensive squad in the Premier League. The squad cost is estimated at approximately £409m plus another £194m in wages. They also have the experience of winning the league in two of the previous four seasons and they have a manager who has recently won the league.

In comparison, the Arsenal squad despite witnessing significant investment in the last 2 seasons, costs approximately £223m with wages of £192m. Unlike Manchester City, Arsenal are yet to win the league in the last 12 seasons although there are some individuals in the Arsenal squad who have won the league in other countries including Petr Cech who won it last season in England as Chelsea's back up goal keeper.

What majority of the pundits don't confess to is that they think the Arsenal players and their manager do not possess the mental strength, the bottle to last the distant in a full Premier league season. Time will tell. Before Yuri Alekseyevich Gagarin journeyed into Outer Space, no human had the bottle, the mental strength to do the same. So fingers crossed. Bring on May 2016.

To understand the assertions about squad depths, I have decided to compare both squads. Here goes

Goal keepers
Manchester City have Joe Hart as their number 1 and Arsenal have Petr Cech. In terms of experience and career attainment, I believe I will struggle to find a sane person who thinks Joe is better than Petr. In terms of performance so far this season, Petr steals a clear march over Joe. While Petr is somewhat at his peak, there is a view that Joe has many more years ahead of him. If you are not convinced and you are a lover of stats, please see the  infographic below 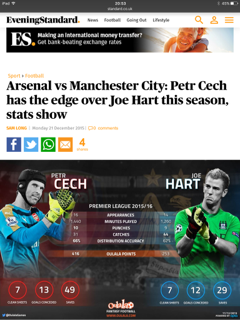 Looking at the number 2s, I will also rate David Ospina ahead of Willie Caballero. Quite what Pellegrini was thinking of when he brought Willie 'Frank Spencer' Caballero to City, I will never understand. I rate Ospina highly and he had better stats than Joe Hart last season when both were number ones for their respective clubs.

Defenders
City are blessed with money. This is reflected in their ability to spend siginificant sums on central defenders in the last 2 close seasons. Mangala and Otamendi have been bought for big money and Mangala looked the part when City played Chelsea last season but appears to have regressed since then. Likewise Otamendi, he is strong and appears to be a brute but looks like he is having a torrid time settling into the Premier League this season. City also have Vincent Kompany and Martin Demichelis. In addition, Bacary Sagna can fill in Central Defence if required.

City appear to have the edge over Arsenal in the central defensive area when it comes to the cost of their players. While I admire Per Mertesacker, I think he is a difficult one to sell to most neutrals who are quite accustomed to beastly central defenders, munching everything in their path.  That's not the BFG's game. He is about the timing of the tackles, positioning and aerial threat both defensively and offensively. Yes he doesn't have pace, but he is behind a lot of the good things that the Arsenal defence do.

I rate Lauren Koscielny better than anything City have and that includes a fit Vincent Company.  In my opinion, Vincent was poor last season and the fact that he has had a number of injuries over the last 2 seasons is something to factor in into any assessment of squad depths. Just in case your memories of Vincent last season are somewhat clouded, here are sone stats to help you. 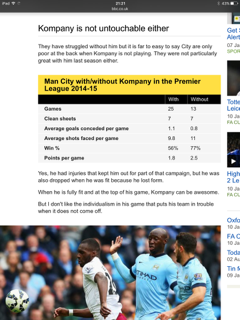 Gabriel and Nacho Monreal who are the Arsenal 3rd and 4th choice central defenders are at best on the same level as Otamendi and Demichelis.

With respect to full backs, City have Sagna, Zabaleta, Clichy & Kolarov. 2 seasons ago, you could easily make the case that Zabaleta and Kolarov were 2 of the best full backs in the EPL. On their current season form, they are not even in the top 10. Zabaleta has suffered 2 injuries this season and now appears to be City's 2nd choice right back. Similarly, Kolarov has endured his own injury woes and appears to be a shadow of his former self.

Personally, the fact that Sagna & Clichy are ex Arsenal players is enough to conclude that their Arsenal replacements are upgrades on both of them. Nacho Monreal might not be as intimidating as Kolarov but on the strength of both players performance this season, Monreal is clearly the better player / defender.

I want to believe that Gibbs as Arsenal 2nd choice left back is better than Clichy. There is a reason why Arsene let Gael go in the first place. Yes he has won more silverware since he left Arsenal but based on current performances, you will struggle to rate Gael Clichy above Kieran Gibbs.

Bacary Sagna / Pablo Zabaleta versus Hectot Bellerin. Yes the City guys are more experienced as this is Hector's 2nd season in the top flight. Not even Arsene can boast that he knew Hector will come good this soon. Hector has been so good that he has displaced Mathieu Debuchy. Dont forget that Debuchy consigned Sagna to the bench of the French national team during the last World Cup.

Based on these comparisons, it is difficult to make a case for City having a footballing advantage over Arsenal in defence.

To further reinforce this point and in the spirit of the Ballon D' Or, the BBC Football website conducted a poll today for the best English Premier League XI, below is the final team people voted for.  I know Arsenal fans have a reputation for hijacking polls, but you can easily see from these XI that the results of the poll appears objective. 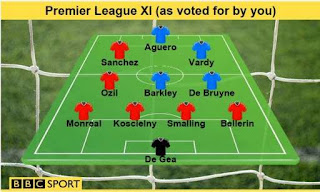 Based on current form and contributions to their respective teams, it is fair to say that Ozil is streets ahead of Silva at the moment. At both of their pomps, their is a chance for a debate on who is the better player. However at the moment, Ozil wins it and is a early front runner for the EPL Player of the year.

Nothing City have in the defensive midfield position is a match for Francis Coquelin. He was way way ahead of the competition in the 2nd half of last season and picked up from where he stopped at the start of this season until he sustained an injury.

Based on current available players, you will choose Fernadinho ahead of Flamini or Chambers in the defensive midfield positions. However Fernando's partner in Yaya offers less of a threat to Aaron Ramsey in the same position. Yaya was a world class player a few years ago but unfortunately and as it is with all players at some point, age has caught up with him.

Also Yaya does not enjoy pairing up with the defensive midfielder. He wants to play in the David Silva role and because City want to accommodate De Bruyne & Sterling, City are unable to move Silva to the wings to accommodate Yaya behnd the Central Striker.  Apart from not fancying the role, Yaya's legs are not what they used to be. They are still long, he can still stike a mean shot and his brain is still working at full pelt, but the body is less willing. This is where a Santi Cazorla or Aaron Ramsey have an advantage over Yaya.

Sterling and KDB cost close to £100m and they sometimes look the part. But will you exchange anyone of them for Alexis Sanchez? Hell No. They are both exciting talents but they both have nothing on Alexis. You might argue that Theo Walcott or Aaron Ramsey or Joel Campbell when they play on the wings are not necessarily better than Sterling, KDB or Jesus Navas and you will be right. However City's talents in this area is not necessarily much better than Arsenal's. Sterling is developing and to a large extent so is KDB. Jesus Navas however is a different kettle of fish. He is lightning quick but will find it dffiuclt to score in a whorehouse.

Strikers
City is blessed with Sergio Kun Aguero while Arsenal's number 9 is Olivier Giroud. The French striker sometimes alternates his striking duties with Theo Walcott and it is possible that Danny Welbeck might get a look in when he returns from injury hopefully next month. In addition to Sergio, Manchester City have Wilfried Bony and the hot and young Nigerian international - Nacho.

Unquestionably Sergio is the better striker although his availability has been in patches over the last 2 seasons. However and despite all the stick he gets, Olivier Giroud is a very decent striker whose strike rate favourably compares with a number of top European league strikers like Robert Lewandoski & Karim Benzema.

When I started to write this article very late on Sunday, I wasn't going to delve too much into statistics. I however read this article by @shotta_gooner and I will recommend it to everybody with a half a brain who genuinely loves football. I suspect this article will not be up your street if you are the type whose every 2nd description of a footballer, manager or club side is 'shit' and 'wanker' (no offence meant). The article is a thinking man's take on football and should be recommended staple for all aspiring pundits. In fact, I decree that anybody who  is inclined to take up a football punditry role on national TV or Radio must read this article and ensure their research is at the level outlined in the article before they are allowed to spout their stuff.

So, is the Manchester City squad better than the Arsenal squad? I'm sorry I can't see it, I don't think so.  Yes, the City squad is clearly more expensive but I don't see a gulf in quality that the 'punditerrati' keep referring to.