Scammers, Scamming or Scam artistry is not a recent invention. It goes way back in the history of man. I’m sure some will be familiar with the story of the Trojan Horse. In case you are not, you can learn more here . The Greeks used it as a subterfuge to conquer the city of Troy.

If you are a creationist, you are no doubt aware of the story of the snake pretending to be what it was not in the Garden of Eden. The snake persuaded the first human pair to go against their creator and the rest is history.

Fast forward to our modern era. Like it was back then so it is today. We still allow ourselves to get scammed. You receive a letter that you have won the Spanish lottery. A competition you never participated in and you want to claim the prize and end up forking out money to claim your prize. Or you receive a mail from a generous man in Africa offering you a share of some huge amount of money that can only be released by providing your account details and you agree, effectively asking to be scammed.

I see lots of similar scams with some of the football related things I have noted on Social Media. Don’t get me wrong; I think social media is a fantastic invention. What we should realize though is that social media is not a new thing. It didn't start today. Before the advent of Facebook there was MySpace.  Before the advent of Twitter, there was Yahoo messenger chat.

The Spanish lottery scammer and the 'money tied up in Africa' scammers banked on the fact that their scam was not in the open. There is always an element of secrecy especially with their potential victims. However the football scam artistes on Twitter are brazen. They do it openly and succeed in scamming many.

Take Piers Morgan as an example. He has something like 5 million followers majority of whom are ready to lap up any drivel he comes up with. They believe everything he says is gold dust.  For example, he has proposed a few managers for Arsenal in the past. One of these was Harry Redknapp. Surely that alone is enough to discount anything he says thereafter. It ought to be a crime akin to a capital offence. No, people still lap up his comments. Is that because we are suffering from amnesia or we just love been scammed.

Take a look at this graphic from Paddy Power. These are the players Piers Morgan has asked Arsenal to sign.  You can firmly classify this in the “You couldn’t make it up” category. Stop, sit down and think. Do you think this person actually understands football? Does he deserve to be listened to? 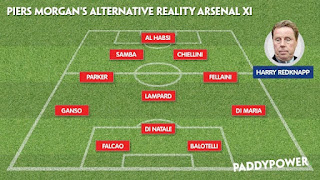 However you still find thousands of people on Twitter claiming that he talks sense. Gullibility of the highest order. I’m sorry this is the classic definition of NON SENSE. Any manager who signed that lot in one team will be out of a job now. But Piers Morgan is still on Twitter talking more NON SENSE. Claiming to know more about football than a professional who has dedicated his life to his profession and has done so at something of the highest level within the game. If Piers’ reputation as someone who understands football is not a scam I don’t know what is.

Is he truly a fan of Arsenal even? Below are some of his recent comments (I paraphrase):

"Wenger is a busted flush"

"The FA Cup is rubbish"

"Ramsey will never amount to anything"

"Wenger should spend whatever amount it takes to buy players"

A recent article I read referred to him as a “Media Whore”. I agree completely because Mr. Morgan inserts himself into any controversy going.

Kanye West Twitter battle with some other celebrities. No surprise, surprise.  It's Piers Morgan again. What is he? A Russian Matryoshka doll? Take one out and oh there is another. Is he a reporter extraordinary or what? Seeking relevance with every trending /controversial subject going.  And nothing gives him that platform as the divided fan base of Arsenal. There is always that vocal section who love to have their ears tickled by him. Who conveniently forget his horrible atrocities towards Arsenal fans in the past and his dimwitted recommendations in terms of player purchases.

In decent societies and in societies that hold people accountable for their actions, Piers Morgan would have conveniently skunked off to oblivion never to be heard off again after offering a full apology to the people he has conned with his comments.
Posted by Unknown at 05:58