Arsene gets excoriated regularly in the conventional & social media for his refusal to spend all that money in the Arsenal bank account. It doesn't matter if 'ALL THAT' money is for day to day expenditure or if the club is compelled by the banks to keep a certain amount of its resources in cash. JUST SPEND THE MONEY.  A lot of Wenger's criticism has come from many who are financial and economic illiterates and some from mischief makers.

Yes, Cech was Wenger’s only purchase in the summer transfer window and despite Arsene's protestations that he will only buy if he sees a player that can improve on his present squad, the emphasis has been on spending for spending sake.

I have seen many exchanges on social media about player signings and I am yet to see any of the transfer wizards come up with the name of a player that Arsene could / should have bought in the last transfer window that would have improved on his current crop of players. Schneiderlin was last seen setting the Manchester United midfield alight. Anthony Martial is the new Messi. Otamendi is the new Tony Adams. Yohan Cabaye is inspiring Crystal Palace to their lowest league finish since they gained promotion. Raheem Sterling - rich man's Alex Iwobi and a poor imitation at that.

The Suarez transfer saga is another stick people use to try and deride Wenger. For me, its all about an agenda to fit in with the "Wenger doesn't want to spend money" narrative. This is what the Liverpool owner said about the transfer saga here

If after reading this, you still blame Wenger. I'm sorry I can't help you. Without the player agitating, there was no prize that would have made Liverpool sell to Arsenal. What Suarez had to do at the World Cup to engineer his move is proof of my stance  and that of every right thinking person on this matter.

Wenger like any manager who has managed for longer than a minute has a doctrine on how he sees the game of football and how he wants his players to approach the game. Some players will fit in within this doctrine.  Some wont. It’s LIFE. Some players can be adapted, some are already at a stage of their career where this adaptation is less likely to yield results.

In addition, Arsenal as a club has values. You might scoff at these values and that is your choice. Arsenal’s values prevents it from doing business with certain football agents. It is a prize the club has decided to pay for having these values. These values will automatically prevent Arsenal from signing some players except those players decide to change their agents and Arsenal is not in the business of forcing players to change their agents.

I am not sure some Arsenal fans understand or appreciate the self imposed restraints the club operates under. If they do, I will genuinely question their continued support for the club. Why do you continue as a fan of this football club when it is obvious your values and the objectives that results from those values differ with that of the club? Is this is a case of unrequited love? Should the club and its owners change their values to satisfy your cravings?

I get the thousands of fans who were born within spitting distance of N5 or who have historical linkages to Arsenal. I get the emotional connection and the difficulty in channelling their support to another football club. However Arsenal is now a global brand and has outgrown North London. Football fans travel all the way from Nigeria to watch Arsenal at the Nou Camp. I met a Swedish fan at the pub in Barcelona who travels from Sweden to almost all away matches in the Premier league.  So individually, as we constantly evaluate our lives and take steps to adjust things we are unhappy with or that causes us grief, perhaps we might want to do the same with our support of and for Arsenal.

Back to the issue of buying players. I get that we are all part of the BUY BUY BUY generation. Who won't want to buy when you can get £1 clothing at Primark, £1 furniture at IKEA and £1 everything at the Pound Shop. So why should football be different? Unfortunately players cost more than a pound. But please where did the BUY BUY BUY mentality take Man City this season and last? What about Manchester United? Or Chelsea? Or Newcastle?

I just wonder how the contradiction on people’s stance with Wenger is not self evident. “He should spend some effing money” & “Now we know spending money doesn’t win the league”. Make up your mind SHEEP (sorry I meant PEOPLE).

Wenger is very stubborn. But Wenger wasn’t stubborn enough to hold on to Van Persie when the Judas literally threw a grenade into the dressing room at the Emirates.

People are quick to point to our 8 years of trophy drought and use that to condemn Wenger. Fine. Enjoy yourself but I have one response 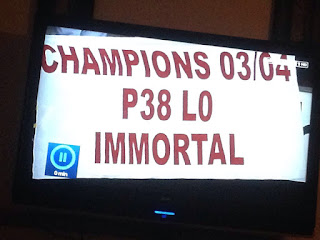