Can We Arsenal Fans All Live In Peace Together

I have just finished watching the NLD and I am delighted with the point. I thought it was somewhat similar to the same fixture last season when we were  somewhat fortunate to get a point.

Prior to the start of today's match, I was ready to settle for a clean sheet and a draw. With that result, Petr Cech equals that other bloke's EPL Clean Sheet record and we stay joint top of the Premier League table. You can accuse me of lack of ambition but I know you will agree with me that the Premier League is not won in November.

For me, it was imperative we stay in touch with Manchester City going into the International Break as we have been decimated by injuries. Also the tonking we got in Munich was telling. You are never sure what kind of reaction you will get from Arsenal after such a bad day in the office.

If my experience serves me right, we tend to draw after heavy defeats. Additionally, we have not been playing very we'll - we scraped past Everton (thanks to Petr Cech for saving 2 points), we were abject against Swansea in the 1st half and could easily have been 3 nil down by the end of the 1st 45 minutes and Munich was a disaster of epic proportion. I am not or one second forgetting the 'shit shower' at Sheffield although some are wont to discount that match because it was the Capital One Cup and it wasn't our first choice back 5.

I disagree though.  4 of those Arsenal Back 5 in Sheffield played in the back 5 in Munich and 3 played in the Back 5 this evening against the Middlesex chaps. If only we had used the Sheffield game to prep our defence maybe subsequent results might have been better. Who knows. The Sheffield defeat continues to rankle me.

Back to Munich as this was the inspiration for my write up today. As I got onto the plane at Stanstead, I recognised two notable faces amongst the Arsenal fan family. One is somewhat balanced in his admiration for Wenger and the other is rabidly anti Wenger. I know I am stating the obvious but both side of the Wenger debate appear to enjoy watching their team play, spend good money doing this and want their team to do well. I think the ones who actually want the team to do poorly are beyond redemption.

So in the words of Rodney King "Why is that we can't all just get along?" as Arsenal fans.

I am often on Twitter and I see many Arsenal fans at each others' throats. The abuse, the insults, the name calling, the baiting. You will think these are fans of opposing clubs. What seems to be so divisive is the fact that some want Arsene out and others don't.

I am not sure if both sides of the Wenger debate realise that there is no manager that 100% of the fans want. Not Sir Alex Ferguson, not Pep Guardiola and not that Comedian in West London. That's why we are humans. However once the Manager has been appointed and / or is in place, then all the bickering should stop.

I think this  advice from Sir Hubert Chapman is something all Arsenal fans should try to embrace: 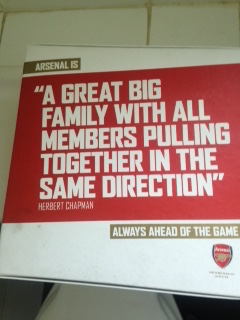 We are a great big family and we should be pulling together in the same direction.

I called one of the Anti Wenger fans to the side in Munich and said to him, "you do realise we all love this club but we don't own it".  So if we realise this and we know for a fact that the owners of the Club are not going to sack Wenger why are we wasting emotions on Wenger in or out?  Why can't we channel our emotions into supporting the club come, rain, sun or high water.  I hold up Crystal Palace fans and the majority of Arsenal fans as my ideal here. Even at 5 - 1 in Munich were trying to cheer the team on.

Yes. The Wenger Out brigade have a point, we should have won more than 2 FA Cups in the last 12 years, we should be more of a challenger, we should not be satisfied with Top 4 only, that's very commendable. The Pro Wenger brigade also have a point. Arsene has been the most successful Arsenal Manager in history. He has changed the club totally and he has achieved something nobody else will probably achieve in our life time - The INVINCIBLES. I will recommend this book by Amy Lawrence to every Arsenal fan. You can better understand where Arsenal were before Arsene and the magnitude of what Arsene achieved in 2003/4. 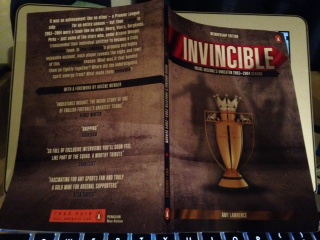 Whatever side of the debate you stand, please realise that the man has his footballing and personal philosophies that align with that of the owners. Yes we fans are intrinsic to making football what it is but the ultimate decision on whether a manager goes or not is with the board / the owner and at the moment on the Wenger issue, the Board is not for turning. They believe in Wenger.

So please get on side. Lets join hands and make the club better. The baiting on both sides should stop. All fans irrespective of whether they are Wenger Out or In and talking especially about those who want the club to do well, spend their money and resources supporting the Team and following the club and should not be derided for voicing their opinions. .

Lets channel our energies to supporting the players Win, Lose or Draw. Lets all pull in the same direction so we can make Arsenal greater.
Posted by Unknown at 12:31